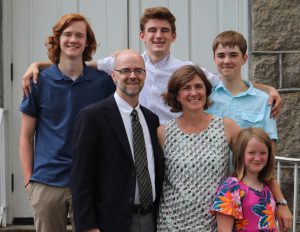 Our senior minister is Rev. Dr. Max Rogland, a native of Tacoma, Washington. Dr. Rogland is a graduate of the University of Washington (B.A., B.Mus.), Covenant Theological Seminary (M.Div.), and the University of Leiden (Ph.D.). He served Rose Hill Presbyterian as Interim Pastor from the spring of 2012 until August 2013, when he was elected by the congregation to continue on as her permanent pastor. Dr. Rogland is ordained in the Presbyterian Church in America and previously served as the pastor of Trinity Presbyterian Church in Rochester, Minnesota. In 2007 he accepted a call as Professor of Old Testament at Erskine Theological Seminary‘s campus in Columbia, where he taught until being called by Rose Hill to full time ministry at the church. He is married to Lara, and they have four children.

Our music director, Kaaren Miller, provides accompaniment for our worship services and conducts our choir. Kaaren began studying the piano when she was seven years old and performing at eight. Her joy in playing music led her to complete an undergraduate degree in Piano Performance from Furman University and a Master’s degree from the University of South Carolina School of Music, with additional studies at the Brevard Music Festival and in masterclasses with a number of premier artists.

To get in touch with Kaaren, please contact the church office.

Joy has served as the Ministry Assistant at Rose Hill since August of 2001. “The people of Rose Hill have loved me and taken me into their hearts and lives and they are part of mine”.

Joy was born while her parents were in seminary and came to know the Lord as a child .After graduating from the College of Business Administration at the University of South Carolina, Joy worked as an insurance auditor for twenty years before coming to serve at Rose Hill.   Joy is the mother of two children. Cooper has finished his PhD and is a pastor in Annandale, Minnesota. He is the proud father of Abigail Marie and Lilah Kay. Daughter Joy Beth is a published author and works for Christianity Today in the Chicago area. Joy’s hobby is genealogy research.

Every good gift and every perfect give is from above, coming down from the Father of lights” ~ James 1:16

Rose Hill’s story begins in 1913 with a Sunday School class held in an old school building. Within a few years a graduate of Columbia Theological Seminary, W. F. Daniels, began to preach and teach regularly at it, and under his leadership the group became formally organized as a congregation on October 31, 1919. The church’s sanctuary was completed a couple of years later in 1921 and it remains in use as our place of worship.

Rose Hill has been active over the years, having helped to sponsor new church plants, foreign missionaries, and a variety of local ministries as well. In 1987 we helped church planter Tom Wood to start a new work that eventually grew into Metro North PCA. More recently, on April 28, 2013 we were privileged to ordain one of our former ruling elders, Andrew Halbert, as a foreign missionary. Andrew and his wife Julie currently serve in Costa Rica with United World Mission. (For foreign missionaries we support, click here, and for local ministries click here.) As Rose Hill’s centennial approaches, we give glory to the Lord Jesus Christ for His faithfulness to us as a church and look forward to His continued work among us!